Idiom for Kids – What Does ‘Dropping Like Flies Mean? A Free Printable Poster for Your Classroom Wall. 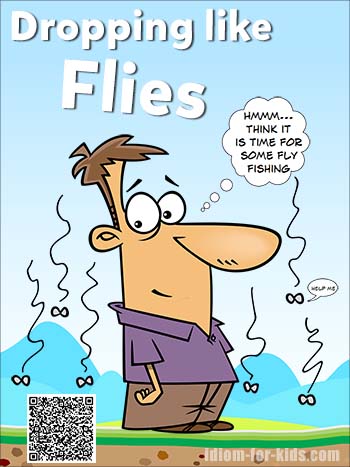 An idiom is a group of words that mean something different from what the actual words say. This means what is said in an idiom is not exactly what is happening but often describes another feeling or action. Idioms are a bit like codes when we first meet them. We can solve the puzzle to figure out what they really mean!

Idiom of the Week:

I am a big fan of introducing a new idiom each week. Not with the express goal of learning a lot of new phrases, more to raise awareness of idiom in general. Print out a poster each week, discuss and play with it and then display it on the wall. Once you start looking, phrases will ‘catch your eye’ all the time 🙂

Etymology – (Where the phrase came from)

It is thought this idiom began as a result of how short a fly’s life is. They only have about a month to live before they die… even less if someone swats it with a rolled up newspaper. People have referred used the term ‘like flies’ since the 1600s to mean ‘in great numbers’ but the first the first recorded use of the phrase ‘dropping like flies’ was used in a newspaper in 1902.

Display these dialogue models and have students build them into quick plays:

Olivia: So many people in our class is getting sick with a stomach bug.
Tao: Yeah, they’re dropping like flies!
Olivia: I don’t think flies are the kind of bug I was talking about.
Tao: Dropping like flies means everyone seems to be getting sick at the same time. There aren’t many of us left who aren’t sick.

Malia: I can’t believe you finished the race! I’m so tired and I only got halfway.
Lily: It wasn’t easy. I saw a lot of runners dropping like flies but I kept going.
Malia: I know, I was one of those flies! A lot of people were quitting because the race was long and exhausting.

Examples created to illustrate points in teaching can often be a little… ‘forced’ to say the least. When faced with these sorts of examples, it can be a lot of fun to develop a sort of ‘in joke’ to highlight / over emphasize the author’s  intended learning.

Here are a few tips to try:

In pairs students create a very short play that ends with the line, ‘When pigs fly’. You can have them do a ‘Think, Pair, Share’, ‘Think, Pair, Square’, and when they are feeling confident ask for victims… do a double take… I mean… volunteers to perform their skit for the class.