A Little Bird Told Me

Idiom for Kids – What Does ‘A Little Bird Told Me’ Mean? A Free Printable Poster for Your Classroom Wall.

What does ‘A Little Bird Told Me’ mean? 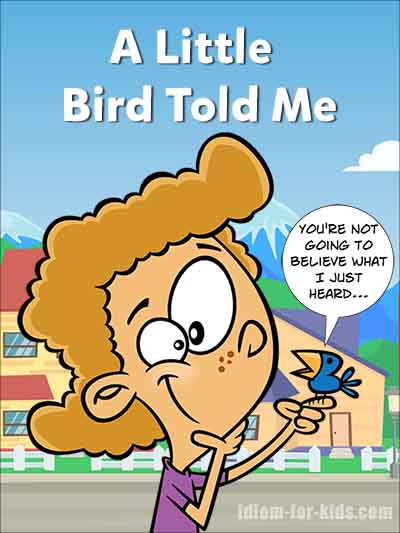 Idiom for Kids – A Little Bird Told Me

When discussing idiom, act them out for students. Don’t be afraid to HAM IT UP!

Etymology (The Origin of the Phrase)

We are not quite sure where this idiom started. The general opinion is it originated in a time well before cell phones and computers when people would send letters and short messages by carrier pigeon.

Brody: Hey Asha, A little bird told me you were planning a surprise party for me.
Asha: (looking around) Really. I didn’t know birds could talk.
Brody: Oh you big joker. It is a phrase. It means someone told me the secret about the party but I don’t want to tell you who it was!
Asha: Oh I see.

Nina: Hi Abby. What’s new?
Asha: Well, a little bird told me you made the football team.
Nina: I didn’t know birds talked!
Abby: A bird didn’t really talk to me. It’s a figure of speech. It means someone told me something in confidence and I don’t want to let you know where it came from. Good job making the team though!

Making it Their Own:

Have students build short plays to experiment with this idiom. Have them ‘Think, Pair, Share’, ‘Think, Pair, Square’ their interpretations and when they’re feeling brave ask them to perform their skit for the class.